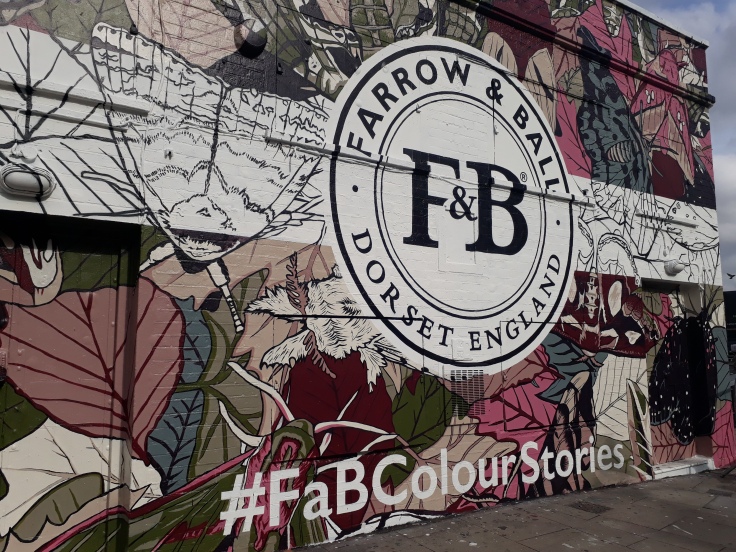 I was privileged to get tickets to their launch exhibition, the Farrow & Ball Immersive Event.  It didn’t disappoint.

Farrow & Ball are famed for their sophisticated, rich and luxurious colours, so the announcement of these new nine hues was met with much excitement in the interior design industry and the launch exhibition was suitably exciting.  It took you through a journey of discovery, introducing you to each new colour as you wandered through the different sections.

The colours, as you’d expect from Farrow & Ball, are very grown up and they cover the full colour spectrum, from your base ‘White’ through the colours to a new black.  For me there was only one surprise in the mix, which I’ll get to in a minute.

So, let’s get started with the basic white, School House White No 291, so called as it’s reminiscent of the colour used in school houses.  It’s a very creamy warm white, very inviting and shows how many different shades of white there are.  Put this next to a pure white and it looks more cream, with distinctive yellow tones.

Next up is Treron No 292, a grey green version of an existing Farrow & Ball colour, Pigeon.  In fact the name Treron originates from a species of pigeon.  It has a slightly more yellow tone and is set, I believe, to be another F&B classic.  Due to the base green of this colour it would work well in rooms overlooking the garden, although it is really quite a versatile shade.

Jitney No 293 is a neutral shade, sandy and relaxed, almost beige but with depth and interest.  The name comes from the buses that take people out of New York City to the beaches of the Hamptons.  It’s another very versatile colour.

Sulking Room Pink No 295 is a dusky muted pink, which would work well with Great White 2006, Pitch Black 256 and Manor House Gray 265.  This colour conjures up images of a boudoir and the name stems from the French work ‘bouder’ – to sulk.  This pink has grey undertones, making it soft and calm and versatile to use.

The next colour was my surprise, not initially seeming to be a Farrow & Ball colour at all. Rangwali No 296 is quite a vivid, vibrant pink, by F&B standards.  It was inspired by the colourful powder used at the Holi festival of colours in India.  I’ll be honest, I’m struggling to even think where I’d use this colour, so I’m looking forward to seeing how other people play around with it.

Staying on the red side of the colour spectrum, Preference Red No 297 is a warm burgundy, named in honour of the Farrow & Ball original trade name.  This colour makes me think of a good, full-bodied, wine.  I think it would work well either as a block of colour on the walls, with Bone No 15 as a trim colour, or alternatively as the trim colour on the skirting boards and door frames.

Bancha No 298 is a velvety olive green, named after the Japanese tea leaves.  It is another colour that would work well in a room overlooking the garden.

Moving on to the new blue, De Nimes No 299 is an elegant blue, inspired by the cloth of everyday workwear originally made in the French city of the same name.  Yep, it’s inspired by denim (and I never know that denim originated in France!)  It has grey, muted undertones and a calming feel.

Finally, there’s the new black Paean Black No 294, which is a red based black – the red really does shine through, making it such an interesting shade.  The name comes from its inspiration of old leather hymnals, which included a song of praise or paean.

So there they are, the hotly anticipated nine new Farrow & Ball colours.  I really look forward to seeing how people use them and, hopefully, I’ll get to paint some furniture with them myself sometime soon.